How to Create a Feather Wipe in Premiere Pro

Have you ever wanted to add a vintage-looking transition to one of your videos? The feathered (gradient) wipe is a great effect that has been used for years.

Above you see the ‘wipe’ transition. Below is the ‘linear wipe’ with feathering.

I’m currently editing a video for UC Berkeley to promote their yearly open house. The promo video’s theme has to do with the over-a-century of science, sports, performance, etc. So I’m combining archival footage with new footage, and the first part of the video is like an old-time newsreel. I wanted to add this feathered wipe effect that I saw in another video that I saw. Luckily Premiere Pro has the right effect to do the job, but it’s not in the area you would imagine.

Below is a written tutorial as well as a video tutorial for you to watch.

Watch the video tutorial below: 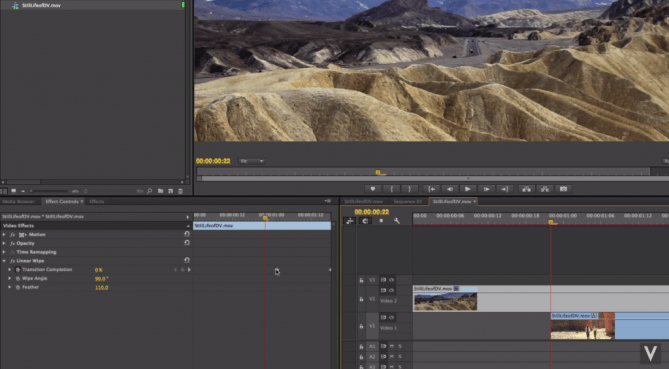 There you have it! That’s how to create a soft wipe effect with feathering in Adobe Premiere Pro. It’s not the easiest transition to do, because it takes keyframing. But it is a great effect to use for a bunch of project. I hope you enjoyed this tutorial!

NOTE: You can also change the Angle to change the direction of the wipe (see cool Star Wars wipe below).